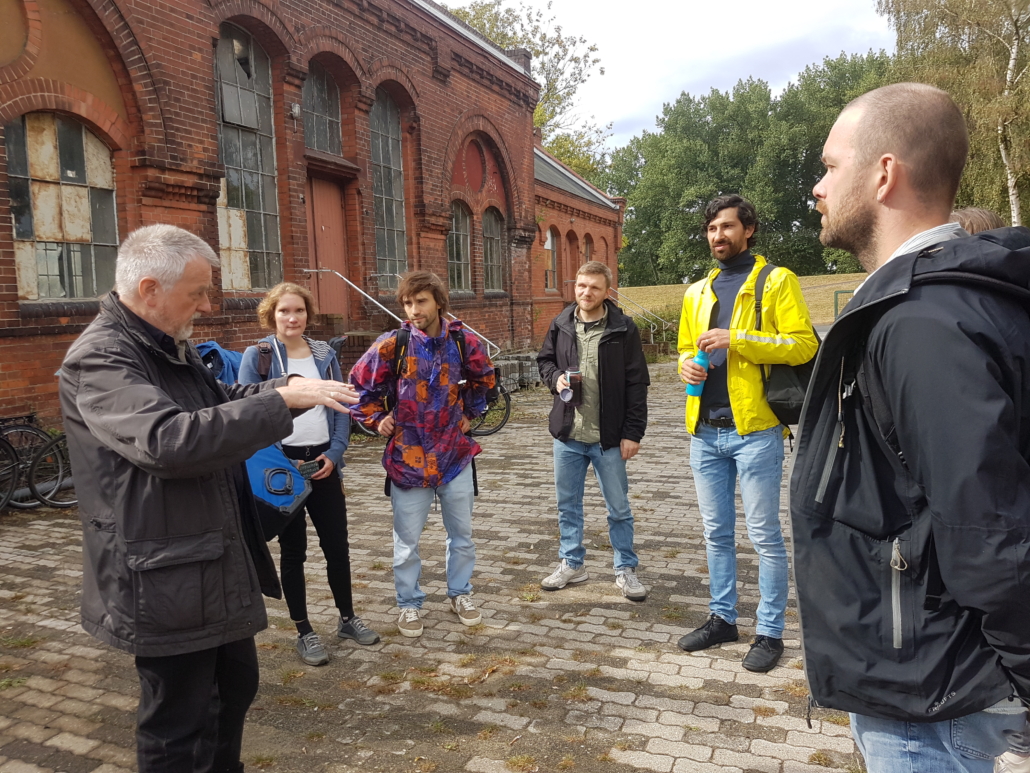 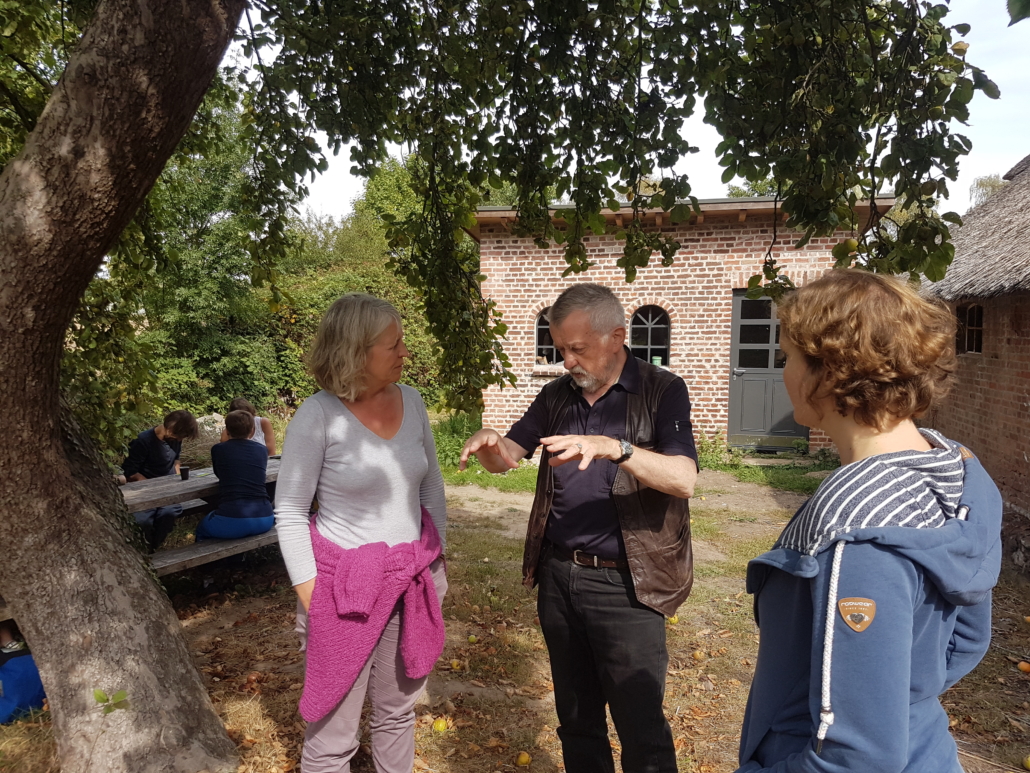 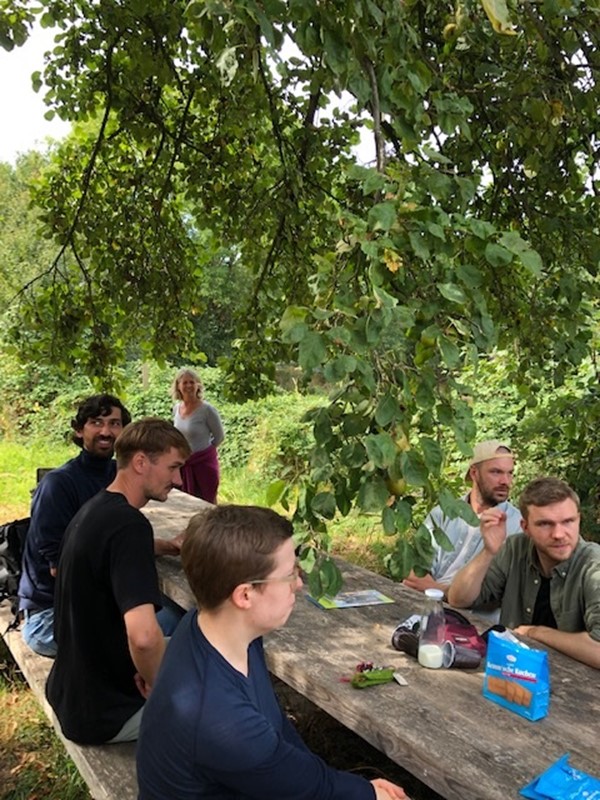 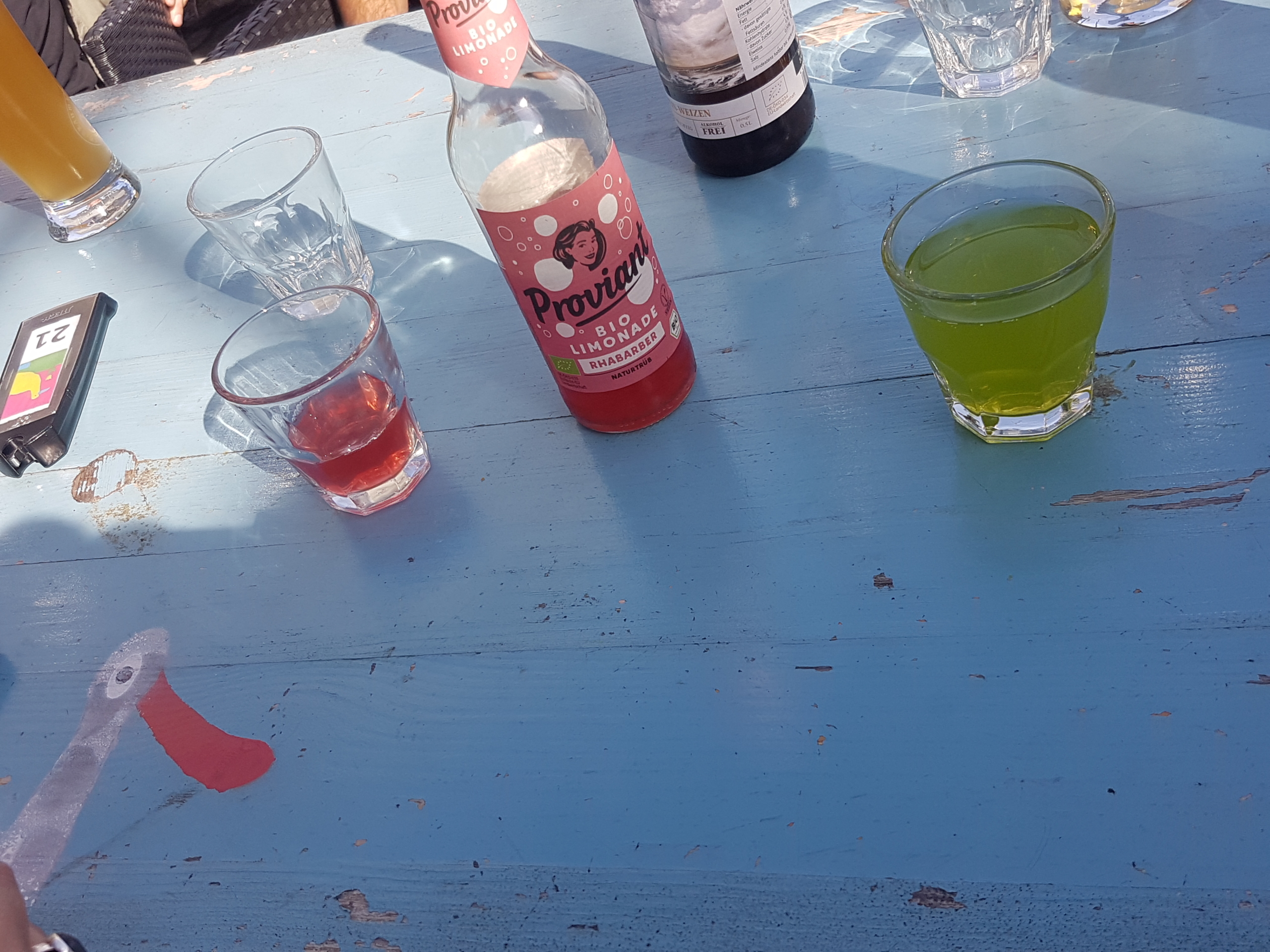 On 5.9.22 the corsus team was in Hamburg on a company excursion by bike. After the dry summer, the corsus staff arrived at Café Johanna on Venusberg at 9 am for a delicious (partly Ayurvedic) vegetarian breakfast. Well fortified, we cycled to the site of the former Kaltehofe waterworks. Right on the first section of the route, one of the bikes suffered a flat tyre that was difficult to repair. Fortunately, the corsus team was well prepared for such incidents with patching material and an air pump. The tour of the enchanted round houses and impressive historic halls in Kaltehofe was accompanied by the sun breaking through. Ulrich Mumm from the Jugendbauhütte Hamburg enthusiastically explained the former purpose of the facilities and the restoration with young people from the Deutsche Stiftung Denkmalschutz project.

The former canteen still exudes the charm of the 80s. There are calendars from 1998 in the historic offices and even a telephone with a dial was to be admired. The buildings surprised us with more and more corridors and rooms. Control centres and huge funnels aroused as much enthusiasm in the team as the Youth Building Lodge’s own brick production, which is housed there to be able to produce bricks for restoration in the original format. After this historical insight, the tour continued outside in the nature reserve Auenlandschaft Obere Tideelbe. There you will find Hobbit-like round houses. Only one of these former slider houses is preserved in its original condition as a reminder and for illustrative purposes. A few steps further on, nature is slowly reclaiming the buildings. Decay is desired here. The area is a compensation area on which the hemlock water fennel has been (re)established. Due to the close interweaving of nature to be protected and historic buildings to be protected, the combination of nature conservation and monument protection could succeed on this extensive site and bring benefits to both areas of interest. Such a unifying approach is pursued by corsus in many comparable process support and moderation procedures, in which the aim is to harmonise nature conservation interests and other interests, such as those of agriculture, local recreation or flood protection, through solution-oriented moderation. For example, the large-scale nature conservation project Krautsand, the destination of our last company excursion, as well as the moderation process in the landscape area Großes Torfmoor and, most recently, the large-scale nature conservation project Hamburg, deine Flussnatur!

The next stop was the current major project of the Jugendbauhütte Hamburg in Moorfleet: Ulrich Mumm explained that here an almost 500-year-old Hufnerhaus was saved from demolition at the last minute. It is one of the oldest surviving half-timbered houses in northern Germany and has been restored for a year at a time since autumn 2016 by young adults (BufDi, FÖJ, see info box) under professional guidance. The beautiful thatch could be re-roofed and the façade with windows and gables at the front shines in new old splendour. The interiors are dominated by mighty oak beams.  As much of the old material as possible is being preserved, but in some cases rafters, for example, have to be added for structural purposes. Archaeological excavations will uncover the former fireplace in the recreation room and other details under the concreted floor. Next, toilets will be installed in the former pigsty. In about five years, rooms for seminars with modern equipment could be built here. Strategy meeting corsus 2027 in the Hufnerhaus Moorfleet?

Afterwards, everyone sat down with coffee and Kemmsche cake in the shade of a huge apple tree. There were discussions about monument protection, philosophy, art, social issues and social commitment. Our managing director Anke Butscher, who is a trained carpenter, would have loved to lend a hand herself right away.

We thank Mr Mumm for his lively descriptions, his sparkling commitment and the interesting guided tour!

In unexpectedly sunny weather, the corsus team cycled on to Entenwerder 1, where creative sandwiches, vegetarian burgers and delicious cakes provided new energy according to individual taste. Along the way, we were able to watch the Hafencity Riverbus set sail. On the dried-up meadow on the banks of the Elbe, things got sporty again with frisbee and spikeball. At the end of the eventful company outing, the long table in the office at Großneumarkt was bent over in the evening by the home-made delicacies.

The Jugendbauhütte Hamburg is the 14th of the Germany-wide Jugendbauhütten with the aim of inspiring future generations for monument conservation and craftsmanship. The project of the German Foundation for Monument Protection is under the auspices of the International Youth Community Services. Young people from 16 to 26 years of age can complete a voluntary social year or an assignment in the Federal Volunteer Service within this framework. They are allowed to learn and work directly on the monument under professional guidance. What is special about the Hamburg Jugendbauhütte is that the youths and young adults live here in shared accommodation. The learning of manual skills is complemented by the promotion of a deeper understanding of historical contexts, socio-cultural and philosophical aspects. A new cohort starts on 1 September each year (applications are always welcome). For the first time, Jugendbauhütte Hamburg has founded a non-profit limited company to secure funding and staff. Its aim is to acquire suitable architectural monuments in Hamburg and to restore them in the form of training building sites. In addition, other architectural monuments can be selflessly promoted by the Jugendbauhütte Hamburg.

Corsus is working with municipal business development agencies to set up advisory...