As corsus reported in March and July 2022, the district of Minden-Lübbecke has commissioned corsus GmbH with the moderation and process support for the creation of a mission statement. In this process, a binding vision of how the Bastauniederung model region and the future of the moor are to be shaped is being developed with stakeholders from agriculture, nature conservation, water management and tourism, among others.

The elements of the vision developed so far and supported by all actors were presented in September in the municipalities of Minden, Hille and Lübbecke. This gave the local politicians in the councils and committees the opportunity to inform themselves about the model process. The model region Bastauniederung is now also available online and from 29.09.2022 there will be a survey tool for all participants and the public for one month. There, the mission statement elements will be presented and everybody can make suggestions and additions to the mission statement. On 29.09.2022, the long-awaited public event took place in the community center in Rothenuffeln. The event was so well attended that additional seating had to be set up several times. Of the more than one hundred visitors, agriculture was most strongly represented, but nature conservation, schools, interested citizens and the press were also present. The event was accompanied and documented by the graphical recording of Jai Wanigesinghe. The chairwoman of the district environmental office, Martina Vortherms welcomed the attendees and explained the genesis of the whole process. corsus led the evening and presented the current status. In a panel discussion, four representatives of the major participating subject areas of nature conservation, agriculture, municipalities and the district had their say. In the open question rounds, the participants could express their questions, comments and criticism. After the discussion round, all participants could become active themselves. Maps of the model region and the various elements of the mission statement were displayed on walls. Everyone was asked to critically examine the phrases of the mission statement and, if necessary, make additions. Post-It’s or direct markings on the maps were used to highlight particularly important places. The participants were also asked what they themselves needed in the model region in order to achieve an economically and ecologically sustainable future. This was followed by the final question of what needs to happen in the region itself in order to design protective measures in such a way that climate and nature protection are guaranteed and agriculture can continue to exist at the same time. In addition to the topics previously discussed, the final round also included an appeal to think about the children and young people of the region and to strive for future-oriented solutions.
The results of the event will be processed by corsus and summarized with the stakeholders working group at the end of the year to form a mission statement for the future of the moor and the Bastauniederung model region.

The moderation process is part of the project “Erlebnisraum Weserlandschaft” within the Regionale 2022 UrbanLand OWL, corsus is commissioned by the district of Minden-Lübbecke. 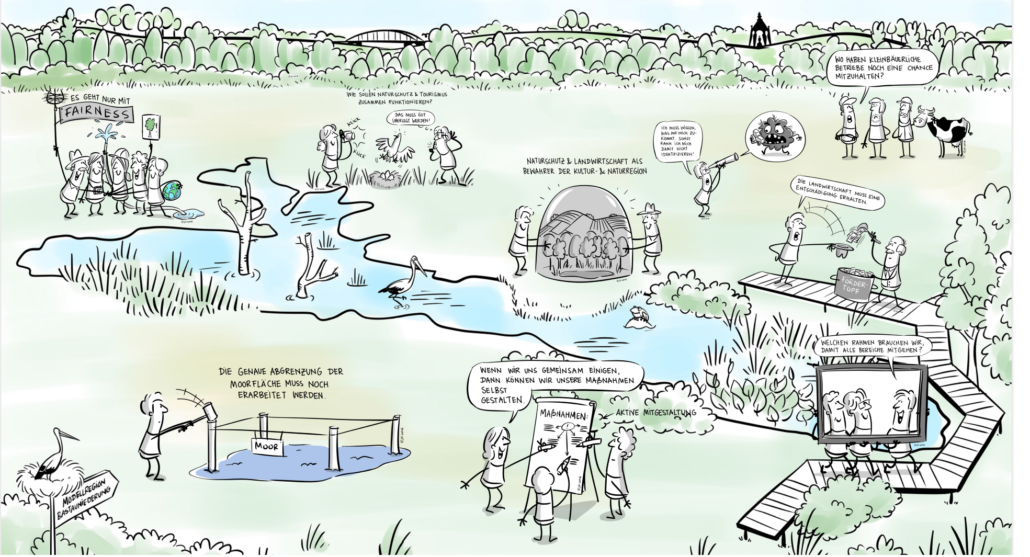 visits to producers of mate, sugar and soy in Paraguay

corsusCLIF workshop with experts in Paraguay
Scroll to top